A ship from Vietnam has been stopped from entering Australia after one of the most invasive species in the world, the giant African snail was found on board.

The massive gastropods, which grow up to 30cm long and weigh up to 1kg, can be a threat to human health if eaten or handled without gloves.

They are a threat to more than 500 plant species, can cause “severe damage” to Australian agriculture and can spread diseases that affect humans, animals and plants, according to the Agriculture Department.

Their “voracious appetite” makes them one of the most damaging land snails.

An outbreak in Queensland in 1977 took an “intensive” eight-month effort to wipe them out.

A ship bound from Vietnam has been stopped at the Port of Portland in Victoria after a bio-security officer found the snails on board in a shipment of wind tower components.

It’s the first of nine ships carrying the components from Vietnam due tClao enter Australia.  The ship will be delayed from entering the country until it can be fumigated.

“We expect the delay to be minimal — it could be a delay of a few days,” Port of Portland chief executive Greg Tremewen said.

An Agriculture Department spokeswoman said the other consignments would be risk assessed and it would “undertake biosecurity actions as necessary”.

The department has warned importers to check for the snails as stowaways – eggs, juveniles or adults.

Biosecurity officers have found the snails in 10 imported shipments so far this year, after detecting 20 last year and 31 in 2017.  A single snail can lay eggs in batches of 100 to 400.

They have already spread from east Africa to much of the Indo-Pacific through accidental introduction or as pets.

AUSTRALIANS ARE URGED TO CALL THE EXOTIC PLANT PEST HOTLINE ON 1800 084 881 IF THEY SPOT A GIANT AFRICAN SNAIL. 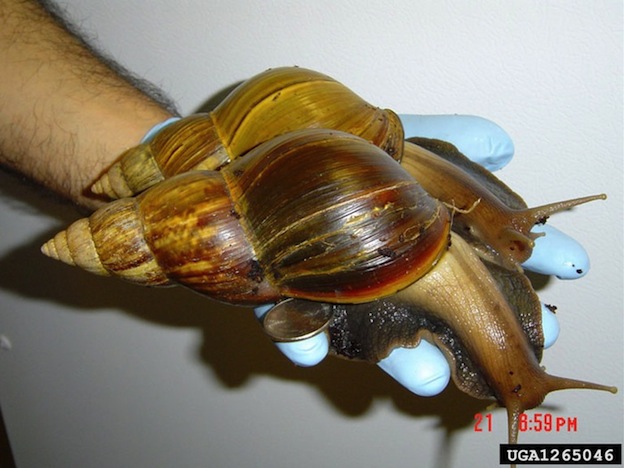