Donate to help save the Victorian Brolga and humans by giving them a voice in the planning system. 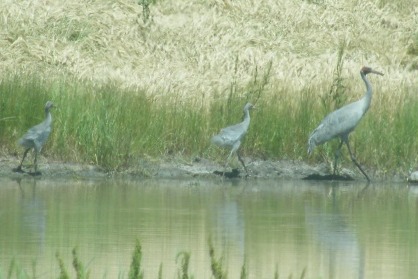 There are now only around 600 Brolga left in Victoria and SE South Australia and these are geographically (and genetically) isolated from the Brolga in Northern Australia. One of the biggest threats to these beautiful birds is wind farms being built in their habitat.

The average person might assume that Brolga and humans would be given adequate buffers (distance) from turbines – after all, that would be reasonable given that these projects are being built with the help of public money in the name of the environment. But that person, sadly, would be wrong. Brolgas are protected and listed under the Flora and Fauna Guarantee Act 1988 (Vic), and, under DELWP guidelines, their nesting and flocking sites are supposed to be buffered from turbines by 3.2 and 5km respectively, but such distances are not applied in practice. Many other important bird species would also receive protection if Brolgas were adequately buffered.

Time and time again during planning processes for various wind farms over several decades we have seen information and modelling presented by companies and their consultants that did not reflect the true impact on Brolgas, humans or their habitats – yet the government just seems to accept it.

The average person might also assume that if there were any problems after the wind farm was built, companies would be held to account against “stringent” planning permit conditions. But again, they’d be wrong. Neither State Government nor Local Councils have made wind farm companies adhere to their permit conditions for noise, bird mortality, Brolga mitigation etc. Nor has there been a cumulative impact study for Brolgas or humans, nor have learnings from earlier wind farms been used to modify layouts for subsequent wind farms, with the “rules” seemingly becoming slacker with every passing year.

As a result, many people have been driven from their homes by the noise, Brolgas have been displaced from their habitats with no successful nesting or flocking, and many, many raptors and other birds have been killed.

Please help us hold governments and companies to account by donating now. Thank you!

What the donations will be used for:

Many citizens around Australia are battling government planning departments, councils and wind farm companies in order to stop wind farms being built without adequate buffers for humans and Brolgas. They are pouring hundreds of thousands of dollars of their own money into court cases that aim to hold these organisations to account, all because the planning system has failed both them and the environment. Companies and governments know that the extraordinary cost individual people have to bear often prevents them from making a stand and asking the courts for justice.

This GoFundMe campaign is an opportunity for you to contribute to such legal battles in Victoria and to help people and communities who already have cases underway to prevent the destruction of human and Brolga habitats from inappropriately sited wind farms. Our target is to raise $600,000 in donations, and use it as a rotating fighting fund.

The first fight this GoFundMe campaign is going to contribute to, is the upcoming legal action proposed against the consultants who enabled the Dundonnell wind farm to gain a permit. This court case alleges, and will endeavour to prove, the consultants’ actions were misleading and deceptive. The case will also endeavour to prove that if the correct information was used in the first place the project would not have gained approval, or would have required three times the mitigation shown in the permit.

Wind farm proposals at Mt Fyans, Hexham and Willatook, if these companies choose to progress their permit applications, will also be challenged and this fund raising will assist those cases if they eventuate.

The Brolga Preservation Foundation (BPF) has been set up to receive the donations from the GoFundMe campaign, and to hold funds in excess of immediate requirements. When costs are awarded to the litigants after a win in court, any funds provided by the GoFundMe page or the BPF will be returned to the BPF. These funds will be managed by the BPF Directors, and at their discretion can be directed towards similar court cases where the QC acting for the prosecuting litigants considers the legal arguments strong and that is has a high chance of being successful.. The idea is that it will be a rotating fighting fund where donated money is returned to the fund if the case is awarded costs, and such returned costs would be allocated to fund future similar cases. The intention is to assist people with the cost of fighting cases that are already underway, but not to initiate proceedings or to fund the case outright.

The donations collected through this page will also go towards assisting the funding of some upcoming cases in relation to enforcing planning permit conditions of other wind farms operating in the western district of Victoria. The wind farms in question are adversely affecting Brolgas’ ability to utilise their habitat, and non-compliance of the permit noise conditions are adversely affecting people living close to the wind farms.

Parties are investigating the possibility of a Class Action against environmental and noise consultants used by wind farm companies. If such a case is initiated and  a QC has considered the legal arguments are strong and that is has a high chance of being successful. then helping to fund the Class Action could be a BPF priority.

If in future the Government, Shire Councils and the wind industry all start to do the right thing by the Brolga and people, and no further court cases are deemed likely to occur, the Foundation can then use any remaining money to undertake other preservation work such as habitat improvement and to fund projects to increase the breeding success of Brolgas.

3 thoughts on “Donate To Help Save The Vic. Brolga & Humans By Giving Them A Voice In The Planning System.”