by Dan Jervis-Bardy, The Canberra Times

The Climate 200 fundraising vehicle used a doctored news headline in a social media attack on Liberal senator Zed Seselja, which was broadcast to almost 100,000 Canberrans weeks out from the federal election campaign.

The Simon Holmes à Court-led group removed the Facebook post following inquiries from The Canberra Times, but not before it spent almost $15,000 pushing it into the feeds of ACT-based users over the past week.

The group, which has made donations to Senator Seselja’s election opponents David Pocock and Kim Rubenstein, said the story headline which appeared in the post was a “mistake”, but refused to say how it occurred.

Climate 200 will now publish a new post correcting the mistake, which will be promoted to the same Canberra audience.

Senator Seselja has unloaded on the erroneous post and is challenging progressive independents like Mr Pocock to disavow Climate 200 and refuse to accept further donations.

Mr Pocock has also criticised the post but said it was hypocritical for Senator Seselja to demand he refuse donations. 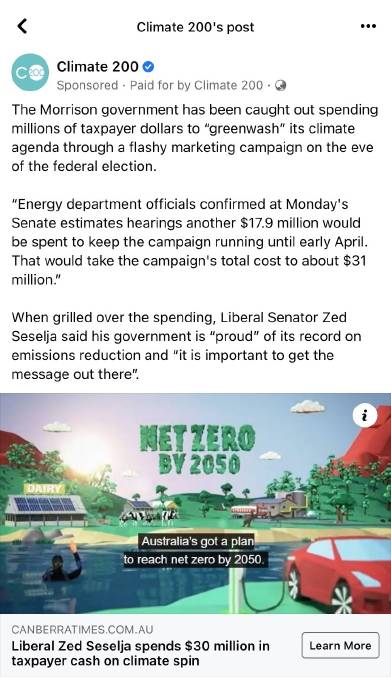 The social media blunder is an embarrassment for Climate 200, which has made restoring trust and integrity in politics a key goal of its campaign to help elect more Zali Steggall-style independents at the looming federal election.

Climate 200 last week began paying to promote a Facebook post which included a link to a Canberra Times story about the Morrison government’s plans to spend $31 million advertising its green energy policies.

The scale of spending on the Positive Energy campaign was confirmed at a Senate estimates hearing, prompting Labor to accuse the Coalition of using taxpayer funds to “greenwash” its energy agenda in the run up to the election.

Climate 200’s post made similar claims, but put the focus on Senator Seselja.

The headline on The Canberra Times article included in the post read: “Liberal Zed Seselja spends $30 million in taxpayer cash on climate spin”.

The Canberra Times can confirm that headline wasn’t used in any version of the story.

The headline that appears when the original article is shared to social media is: “$30 million ad blitz is pre-election greenwashing, Labor says”.

The altered headline reads as though Senator Seselja himself spent $30 million on the campaign, which is patently false.

Senator Seselja did give evidence at the estimates hearing as the representative for Energy and Emissions Reduction Minister Angus Taylor.

He told the hearing that his government was proud of its record on cutting emissions and that it was “important to get the message out there”.

Those quotes were referenced in Climate 200’s post, which also claimed the government had been “caught out” over its spending on the advertising campaign.

Publicly accessible Facebook advertising data showed Climate 200 spent between $10,000 and $15,000 promoting its erroneous post to an entirely ACT audience between February 23 and February 28.

Climate 200 has spent almost $55,000 promoting Facebook and Instagram posts to ACT users over the past 90 days, making it by far the biggest spender in the local market.

Mr Pocock is the second highest, spending more than $14,000 to promote posts on the platform since announcing his candidacy on December 17.

The Canberra Times asked Climate 200 if it deliberately doctored the storyheadline used in the post, and if so to explain how and why it was done.

In a statement, the group’s communications director, Claire Snyder, would only say that the post was a mistake.

“As soon as Climate 200 became aware of the error, the post was taken down,” she said.

Asked if Climate 200 would apologise, Ms Snyder said: “As above, it was a mistake”.

She said the organisation would review its processes to ensure the mistake wasn’t repeated.

In a statement to The Canberra Times, Senator Seselja claimed the Facebook post was more proof that Climate 200 was campaigning for a change of government.

He accused the group of publicly preaching transparency and honesty while engaging in misleading advertising designed to help topple the Coalition at the upcoming election.

Climate 200 has built a war chest of more than $7 million, which it is using to support the campaigns of progressive independents trying to unseat sitting Liberals MPs – including Treasurer Josh Frydenberg.

While its primary focus is on lower house races, it has inserted itself into the hotly contested ACT senate race.

The Pocock and Rubenstein campaigns have previously confirmed they have received small donations from Climate 200. Both are listed on the “candidates” page of Climate 200’s website, although the group insists it has a no-strings attached relationship with those it supports.

Senator Seselja called on “Green Independents like David Pocock” to condemn Climate 200, arguing that a refusal to do so amounted to an endorsement of the “disgusting tactics”.

“This is exactly the kind of behaviour that turns people off politics and it is clearly not right,” he said.

“This is why I have been calling on the Federal Government to enact truth-in-political-advertising laws since well before announcing my campaign to run as the community-endorsed independent candidate.”

The Canberra Times understands the former rugby superstar was not aware of the post and is planning to raise his concerns with Climate 200.

The Canberra Times last month reported that ACT residents – particularly inner-city voters – were among the most prolific donors to the fundraising vehicle.

Mr Holmes à Court said at the time that a desire to see Senator Seselja dumped from parliament was motivating locals to donate to Climate 200.

The Canberra Times contacted Professor Rubenstein for comment, but didn’t receive a response.